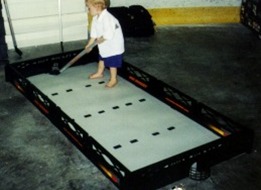 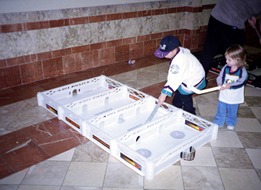 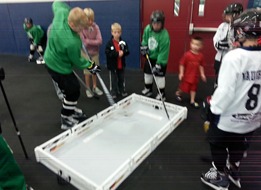 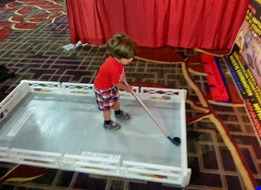 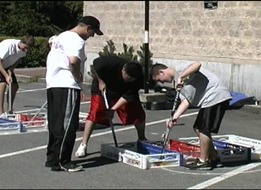 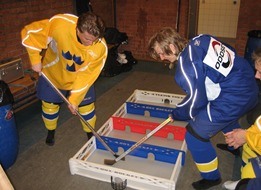 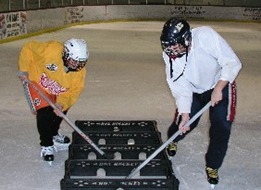 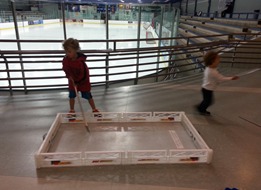 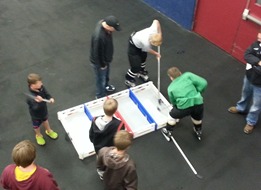 Today's players, whether Pee Wee or Pro need to maintain constant overall conditioning and skill building to acquire the competitive edge over their opponents.

At BOX HOCKEY International, we have developed a unique on & off - ice training product that will help players master certain skills needed to be successful players while at the same time providing them with an excellent workout/fitness program that will build upper body strength, develop forearms, wrists and cardiovascular and improve on their hand/eye coordination, quickness and accuracy. hockey sticks

​     Great Hands are a must for every great stick-handler and is required to have optimum control of the puck. The intensity of an aggressive workout with BOX HOCKEY requires the player to maintain a constant grip, which isometrically strengthens the muscles of the hands.

are an essential key to a better snap and wrist shot (more NHL goals are scored by wrist and snap shots than slap shots).   Continuous play on BOX-HOCKEY will dramatically improve your wrist and forearm strength.  Force the player to use only one hand, this will pump up the forearms and develop better control such as those times when they need to fend off their opponent while maintaining control of the puck with only 1 hand on the stick.  Have them switch over and play with their weak hand.

goes hand in hand with the wrist shots on rebounds and loose pucks in front of the net.  Playing BOX-HOCKEY  promotes the kind of quickness that will allow you to beat the other player to the puck. It forces and challenges your player to be quicker with their stick.

is absolutely one of the most important aspects of overall conditioning.  60 seconds of aggressive and intense play on BOX-HOCKEY will raise a player's heart rate into a range of 160 to over 180 bpm.

will make you a better hockey player against the boards and when digging for the puck.  Competitively playing BOX-HOCKEY is one of the best exercises for young players who are not yet into weight training.  Continuous play will show development in stomach muscles, lats, pectorals, shoulders, biceps, and triceps as well as legs, if focus is given to stance.

Concentration is putting your energy into the task at the moment, which would be staying with the puck.  Focus would be the ability to zero-in on the puck, past what the opponent is doing to take it away from you, and maintain better and quicker control of the puck over your opponent.  Playing and practicing with BOX-HOCKEY definitely improves a player's hand-eye coordination at every level of play helping with face-off control and digging to master control of the puck.

When practicing solo;  the 3 center partitions can be removed and you can use the full 6' of box to practice puck handling with your regular stick and puck other stick handling balls or devices.  The polyethylene surface with a little silicone spray allows you to do your drills as though you were on real ice and the box serves to keep the puck/ball in a contained area.

BOX-HOCKEY can be used on the ice with players playing the game in their skates.  This will help develop the player's balance while digging for the puck against the other player and will promote them being more aggressive when they get tied up against the boards in a real game.   Use as a station during practice instead of letting players stand around and get cold.

is a critical and key ingredient for any team to play and act as a team.  What ever the down-time is off the ice; whether it be after games, in between tournament play, in the locker room, after practice or at home; players will enjoy playing BOX-HOCKEY.It will help create an atmosphere of fun, excitement, and good spirited competitiveness that will help bond teammates.

With more and more teams traveling for tournaments and other league play; having a portable BOX-HOCKEY helps as a warm-up and adrenaline rush before the game and gives the kids an extra activity between games.  It also serves as an additional means of entertainment when back at the hotel where the mini-sticks are now banned! You may find your own variations and benefits that are not mentioned above....if so, please be sure to write back and pass on your experiences....thank you.

I Challenge anyone to play/use BOX-HOCKEY as aggressively and vigorously as they can for 20 minutes and then tell me that what I have written above is not true!

Disclaimer: Results may vary from person to person.